It’s been a while since my last update, so I though I would post a short follow up of the last few months and share some of the final images from the virtual experience.

I added a few additional details, such as the ceiling vultures soaring towards the sanctuary.  Beginning with the ceiling piece photographed by the Ranke expedition, I filled in the missing information by referencing the ceiling at Dendera Temple 7. 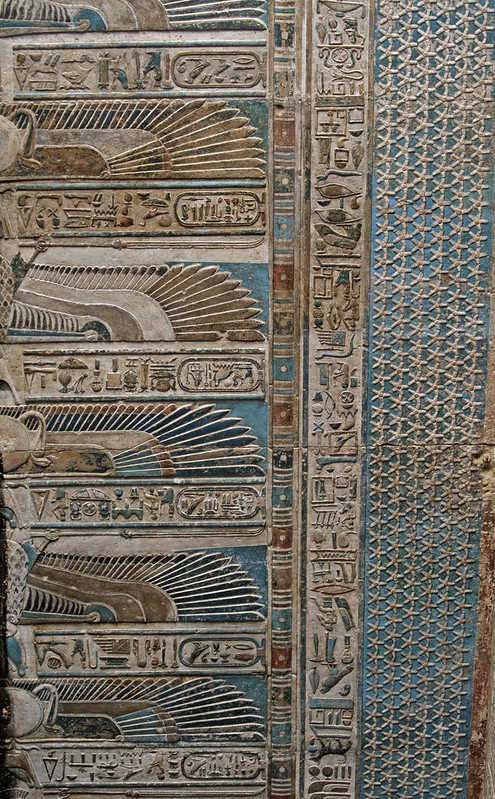 The transition from my home computer to the machine in the lab didn’t go quite as smoothly as I had hoped. I was using a Nvidia GTX 1080ti which flew with the graphics. However, when I began testing in the lab I realized the hardware, an Alienware equipped with a GTX 960, was causing frame drops in various areas. To fix this I had to reduce the overall poly count of the scene (primarily from the surrounding vegetation).  Bellow are a few images from the final version of the temple and surrounding environment.

Having a larger space to walk within was definitely beneficial. Teleporting posed a few challenges to those trying the Vive for the first time. I found that people were trigger happy with the teleporter, as a result they kept hopping to the roof (they seemed a little distressed when I mentioned they would have to through themselves off get back to the ground level). Accidental travel to the roof has become so common that I might remove the navMesh from upper level entirely.

I was immersed into the world of virtual archeology for my Masters Research Project at Ryerson University.  The focus of this project was the digital reconstruction of the el-Hibeh temple in Egypt.  After four months I believe I was able to demonstrate the potential this medium has to offer as a way of bridging the past and present. I'm currently visualizing the past, present, and future of a pre-contact indigenous community. View all posts by Kris Howald